Let’s talk about how one Samurai built a business by embracing not knowing.

When Alex joined us in the coaching Dojo he was like A LOT of coaches in that he didn’t know much.

But that didn’t stop him.

In fact, he used DON’T KNOW MIND to become one of the fastest Dojo graduates ever to build a full time coaching business. He had a full practice within a matter of months.

WHAT IS DON’T KNOW MIND?

Don’t Know Mind is simply the practice of dropping any preconceived notions about something. You literally let go of what you know, or what you ‘think’ you know about something and even about yourself. If you’ve ever been to a new town or city, you know exactly what this is like. Every corner you turn is a new discovery, the sights, sounds, smells and accents are fresh and sharp for you.

In many ways Don’t Know Mind is the mind of adventure and endless possibility. But for most people, it doesn’t last for long.

Pretty soon you think you know something and all of a sudden the freshness goes away. Instead of discovering the way to the cafe you’re trying to make sure you take all the right turns, before long you’re giving directions, even if you barely know the way yourself.

In this way, you lose the freshness of don’t know mind and you also lose the possibility of it.

WHY YOU START TO LOSE DON’T KNOW MIND

You start to lose don’t know mind, because not knowing is scary.

After all, in school when you didn’t know the answer you got in trouble. But coaching isn’t school and it’s why the best coaches don’t just practice asking questions, they also practice NOT knowing.

This is something ALEX learned deeply from the Dojo.

I remember once I asked him about the way he talked about sales and he told me about how he spent most of his time selling REALLY trying to understand the way his clients saw the world. He tried to figure out what they wanted and needed. What was hard for them. He listened deeply without worrying about how it applied to coaching or what he did.

As a result, Alex signed client after client. He even enrolled several people into the Dojo, just because he loved it so much.

This is the power of don’t know mind.

At the end of the Dojo, Alex wrote us a letter: 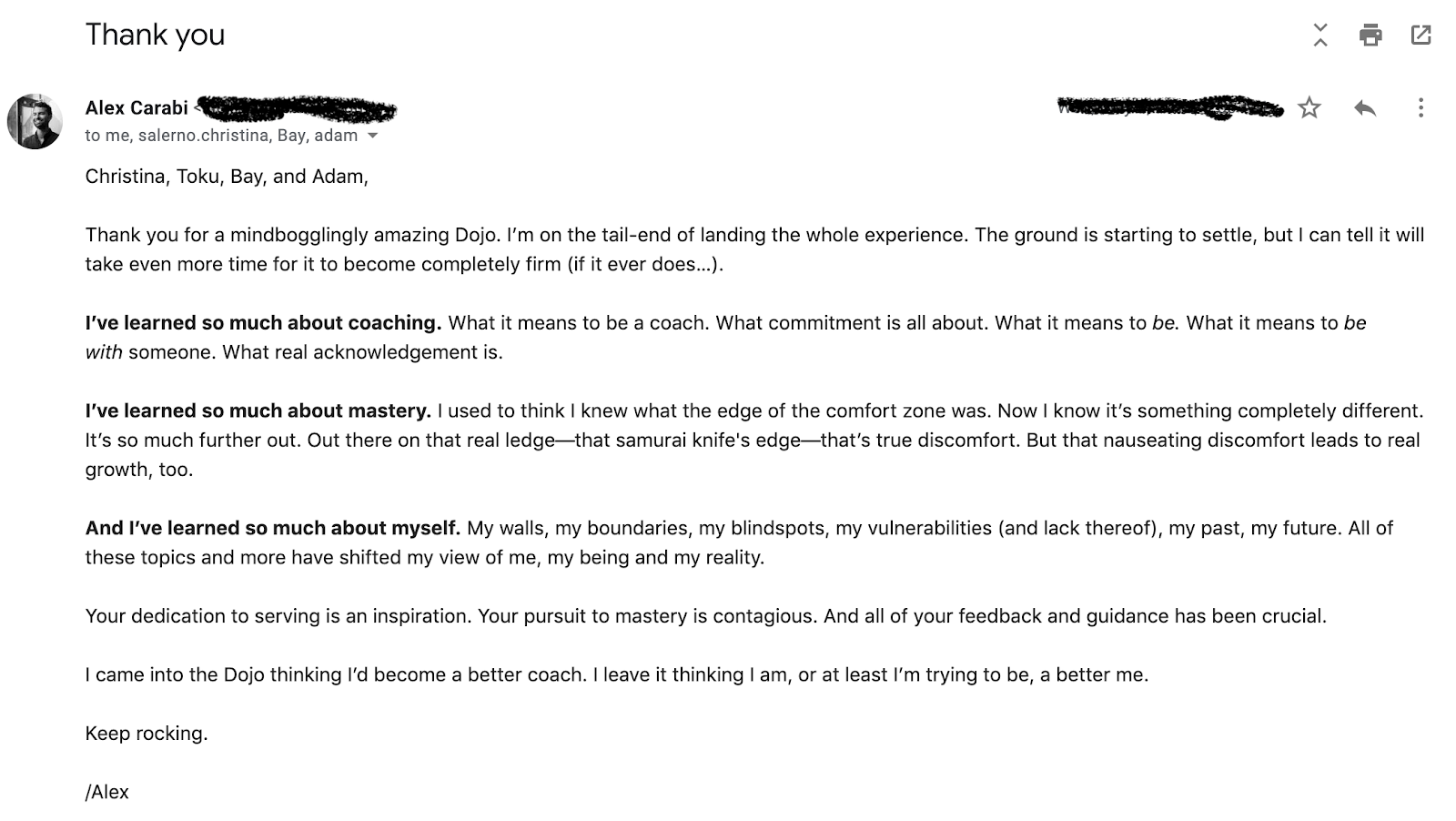 In this letter, he talks about what the Dojo meant to him. The results he got were largely because he practiced with his don’t know mind the whole time. It was also because we practiced it with him.

We asked our questions and gave our feedback from this mind.

If you’re ready to deepen your relationship to the DON’T KNOW MIND, to get feedback and learn how to ask questions like a master coach to transform your sessions…

Come to the next Half Day Dojo on November 15th! We will be focusing on Asking Powerful Questions. Learn more HERE.

We hope to see you there.