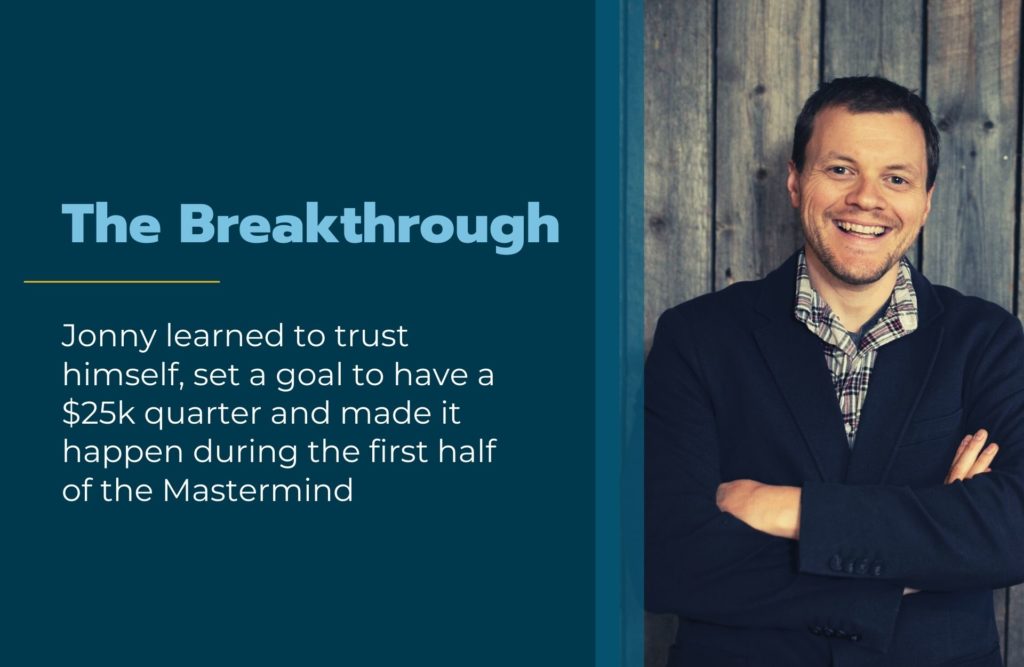 Learn more about working with Toku:

APPLY FOR YOUR STRATEGY SESSION TODAY

When Jonny took the coachingMBA he had already been coaching for years. He had a Masters’s Degree in Spiritual Psychology, he was able to listen to his clients with skill and empathy, and he had led a life of adventure, living in different countries and traveling around the world.

But despite all of his experience and skill, he wasn’t making what he was worth. He didn’t get how powerful he was or how the world saw him as a leader and a coach. But all of that changed inside the coachingMBA. Inside the mastermind, he learned more about himself and who he was as a coach, and as a result, Jonny created his first $25k quarter. But that’s not all…

Jonny took those same things he learned inside the group and kept applying them, which lead him to create his first $100k year as a coach.

Here’s how he did it and the lessons you can learn from his experience:

1) Jonny rediscovered who he was:

For a long time, Jonny saw himself as an alright guy who sometimes showed up powerfully.  Sometimes he would have amazing sessions and sometimes he just felt like his coaching was just alright.

Inside the mastermind, I led Jonny through the Essence Process* which helped him understand who he was for his client’s. He began to understand that those powerful experiences and amazing sessions weren’t just flukes, they were the result of how he showed up in the world.

THE LESSON: Real Change Requires A Change In Being

Jonny’s experience proves one of the core principles of the mastermind (Being vs. Doing). Jonny had learned a lot of coaching and sales techniques over the years, but what was missing was a relationship to himself as a powerful coach.

If you really want to take your coaching and business to the next level, you can’t just shift your strategy, you HAVE to shift who you’re being in the world. To do this you have to understand who you are as a person and make a firm commitment to showing up as a coach in the world. If you do this, real change is possible. Without this, you may just be shifting how things look on the outside instead of transforming who you are on the inside.

When the mastermind began, Jonny didn’t really feel like he was a professional coach. He was nervous to talk about his job in public and often felt a bit like a fraud.

Inside the mastermind, Jonny started to clearly see how this pattern was holding him back. Being around peers who looked up to him and were impacted by him helped Jonny begin to understand that his imposter syndrome had more to do with his own survival mechanisms than the truth of his skills or abilities.

As Jonny’s view of himself shifted he began to take on bigger and bigger challenges. He took on a trip to Mt. Kilimanjaro stepping in for a friend who had passed away. Then he took on creating a proposal to work with more people at a company he coached at. Finally, he took on creating a dream trip with his wife to Peru.

All of this was possible because Jonny began challenging his imposter syndrome, taking risks, and learning that so much more was possible than he thought.

A lot of coaches think, “When I feel more confident I’ll …”

But unsurprisingly the confidence never comes. What happens instead is that they keep trying different things hoping to feel more confident and yet that confidence remains elusive.

The lesson I learned from watching Jonny is that confidence never comes first. What comes first is a glimmer of a possibility that things can be different. Then some coaches dare to step into that glimmer again and again. As they step in, that possibility grows. As they learn, fail, and choose it again their confidence follows.

If you want to be successful as a coach STOP LOOKING FOR CONFIDENCE! It can be created but only by diving in with both feet. And that’s why we don’t just learn theory inside the coachingMBA, we DO THE WORK, support each other when we stumble, and cheer each other when we succeed.

The last shift I saw Jonny make was how he showed up to each and every session he coached. Inside the mastermind, he saw firsthand how powerful it was when I pushed people to do their best work.

While I have a big heart, I hold my student to a high standard. I expect them to make declarations and fulfill what they say. If they don’t, we don’t just brush it under the rug with an excuse. We pull it out and look at what’s really going on.

I challenge my students to be their best selves. I remind them who they are and ask them to show up that way every. single. day.

Because Jonny saw this work inside the mastermind, he started doing this with his own clients. Instead of just letting it slide when a client canceled a session he talked with them about the power of commitment. Instead of letting clients wander through sessions, he made sure there was a real coaching request on the table each call.

The result was that his clients started making more progress and even more importantly Jonny started to respect his coaching more and more. Jonny let go of his fear of being an asshole and instead leaned into being loving but tough on his clients.

THE LESSON: The Best Coaches Demand The Best From Their Clients

A lot of coaches are afraid of being the caricature of an out-of-control high school football or soccer coach. The kind of coach that yells at their players and shames them for the smallest mistakes. As a result, many coaches are overly gentle and lenient with their clients.

This is the feeling we create inside the coachingMBA. One of endless support but also of fierce challenge. The best and most successful coaches don’t create mastery by simply doing the minimum, they create mastery by doing their work with passion and commitment.

If you want to be a professional coach and respect yourself, you have to respect your clients by truly serving them instead of simply pleasing them.

Part of my commitment to myself when I created the coachingMBA was that I wanted to have a program where everyone got results. And while there is some variability in the kind of results my students get EVERYONE who has completed the program has signed more clients and raised their rates. Most have made massive shifts in their business and lives.

That’s in part because I’ve taken these 3 lessons to heart:

And instead of making them optional lessons, I’ve made them the standard. If you want to grow your practice and become the kind of coach that changes lives you’ve got to master these three lessons inside and out. Not just as a theory, or a nice thing to put on your wall, but as lessons that live in your skin and bones.

You don’t have to join the coachingMBA to do that. You can find a coach to work on these with you or even just commit to these 3 lessons yourself as you grow as a coach. But if you’re looking for a container that is committed to making sure everyone in a group wins together, I’d love to have a conversation with you about joining us for the next round.

Want to create these results in your business?