How To Bring Your Coaching Practice Back From the Dead 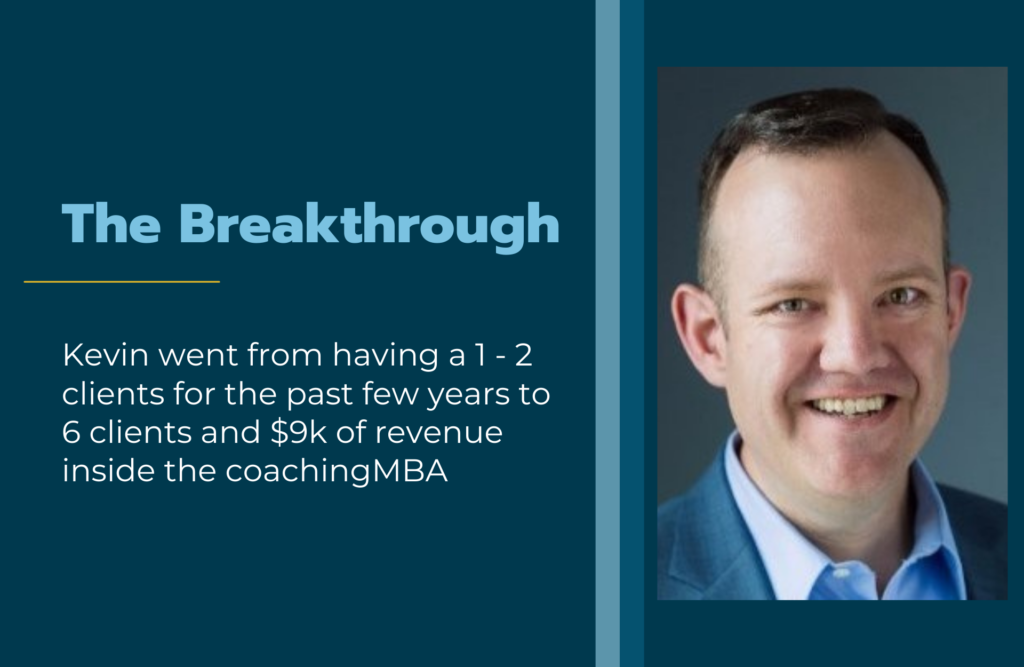 “I got more clients in the 6 months of the coachingMBA than I had, had in the previous 2-3 years.”

Before joining the ​​coachingMBA, Kevin was like a lot of coaches I’ve known. He LOVED coaching, he had done hundreds if not thousands of hours of training. He had worked on his business in fits and bursts but never really found a groove. Sometimes his practice would be almost thriving with a handful of clients he loved. And sometimes it would be incredibly slow with only 1-2 clients at a time.

By the end of the coachingMBA, Kevin went from 1 client to 6 clients, created over $9,000 in new revenue, and reinvigorated his business all of which would have been impressive in and of itself. What’s even more amazing is that he did all this while working his day job. And his day job isn’t easy. You see Kevin helps resettle refugees from around the world into new homes in the US. This means he created this success all while working with refugees from Afghanistan and other places around the world find new homes.

Here’s how we made it happen:

1) Kevin realized he didn’t have to do it alone – Like a lot of people that join the coachingMBA, Kevin realized that when he had been missing was a community of peers to touch, move, and inspire him as a coach. I see this happen a lot with coaches who have been ‘scraping by’ for a while.

Whatever community or support they had when they got started falls away and they end up feeling alone. Their struggle often makes them hesitant to reach out for support, when ironically that’s when they need support the most.

2) Kevin rediscovered joy and fun of coaching  – Even though Kevin LOVED coaching he had started to resent his coaching business. After all this thing he loved came with all this stuff he didn’t love. Sales calls felt awkward, he couldn’t figure out why he couldn’t grow his practice, and there was this constant feeling of doubt and failure that shadowed everything he did.

Inside the coachingMBA Kevin started having FUN! He realized the sales conversation could really just be another coaching conversation. He got bold in looking for new clients. He even made this HILARIOUS video where he embodied a ‘typical coachy coach’ that got everyone in the group laughing.

3) Kevin Started Taking Risks – Even though Kevin had invested a lot of time in himself, he had never made the kind of BIG investment in his own growth and development. And Kevin was “scared to spend money with no ‘guarantee’ of results!” But Kevin decided to take that risk anyway, and he didn’t just stop there. Throughout the mastermind he kept taking risks. He launched a 50 conversation challenge, even though he’d been a coach for a few years. He created space for himself at work by having a conversation with his boss. And he took more risks in his coaching.

The impact of all these risks is that Kevin went from dabbling or trying in his coaching business to ACTUALLY making his business happen. That kind of commitment and courage is what it takes to build a successful practice, and that’s the kind of courage our clients need from us the most.

Because Kevin’s story is so common for many coaches I know, I created a Case Study where he shares exactly what he learned and how it changed his business and practice.