How to Road Trip and Grow a Coaching Business 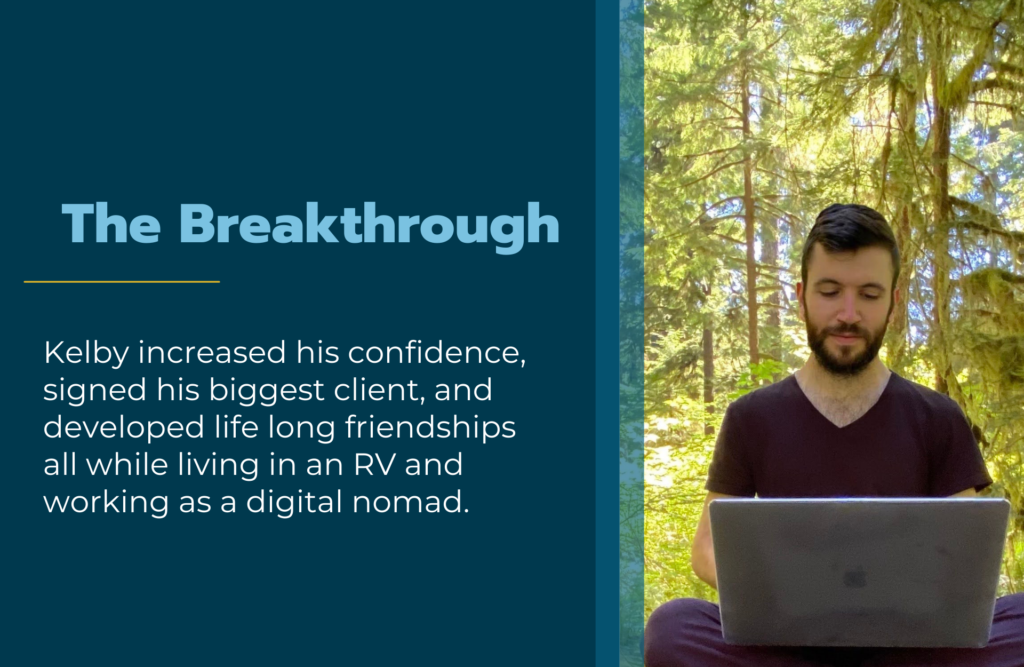 I hear coaches talk a lot about how the things in their lives keep them from having the kind of business they want and how if they could just get things more organized they would be able to finally make progress on building their practice.

But from the very first time I met Kelby, I realized he wanted to challenge all of that. In our interview, he asked if he could do the calls on the road. When I asked him to tell me more, he explained how he was planning to drive around the US in the back of an RV while he built his coaching practice.

I’m sure many teachers or coaches might have said NO WAY, but I loved Kelby’s sense of adventure. I asked him if he was committed to making sure he would be available for all of the calls and when he said yes, I said LET’S DO IT!!!

During the coachingMBA, Kelby grew his practice all while living and working remotely. Even though he faced challenges and took more time off than most coaches might, because Kelby focused on the right things he was able to make incredible progress.

Here’s how we made it happen:

1) Kelby got clear on what his ‘essence’ was – One of the things we do inside the coachingMBA is help coaches discover who they are fundamentally. When Kelby joined the ​​coachingMBA he was already an accomplished, intelligent, young professional. But he often struggled to set himself apart from other coaches. There are a lot of smart coaches out there, but there aren’t a lot of Kelby’s.

Through the Essence Process* Kelby discovered he wasn’t just smart; he actually had the essence of Brilliance. This meant that Kelby had a way of being with ideas and people that made him and them shine. He didn’t need to show people how smart he was on every call, he just needed to sit with them and their future would seem brighter.

By learning to come from this place, Kelby started to relax more as a coach on his enrollment calls which helped people feel how grounded and trustworthy he really was.

It also helped Kelby realize that his love for adventure wasn’t something he did on the side of being a coach, but was actually core to what made him unique.

2) Kelby realized he wasn’t alone – Kelby is the kind of guy that loves finding role models and icons to model himself after. The downside was that he often felt like he was lost and uncertain in comparison.

One of the big problems in the coaching industry is that all the ‘gurus’ act like they’ve got it all figured out. You’ve simply got to join their $20k golden circle and you can learn it all too. But the truth is much more complicated than that.

I’ve worked with some of the world’s top coaches and many of them struggle with the same questions new coaches struggle with. YES the scale and nature of those challenges are different but the fundamental questions are the same.

By joining a group of other coaches at a similar stage Kelby started to realize how normal his questions and struggles were. He was able to look beyond the marketing glitz and begin to understand the simple challenges that all coaches face when they build a practice. This not only gave Kelby more confidence, but it also helped him figure out where to focus his efforts.

3) Kelby got clear on what he wanted to create – Once Kelby realized that he didn’t need to work so hard and that he was MUCH further along than he thought, he was able to put more energy into the kind of work he craved.

He got clear on the kind of leaders that inspired him and started finding creative ways to get his coaching out into the world. Kelby started to see his love of travel as a way to try out new and creative ways to give people an experience of his work.

He put a table up and offered drop-in coaching at a conference, he started hosting peer meetup groups, and he even began hosting a regular practice session for other coaches.

Kelby’s experience shows that you don’t have to wait to build a practice in order to start living the life you want. In fact, stepping into the life you want can be a powerful catalyst for creating the kind of practice you’re longing for. That’s why I created a Case Study where Kelby shares some of the biggest impacts of the ​​coachingMBA and how he’s used what he’s learned to help him continue to grow his practice.